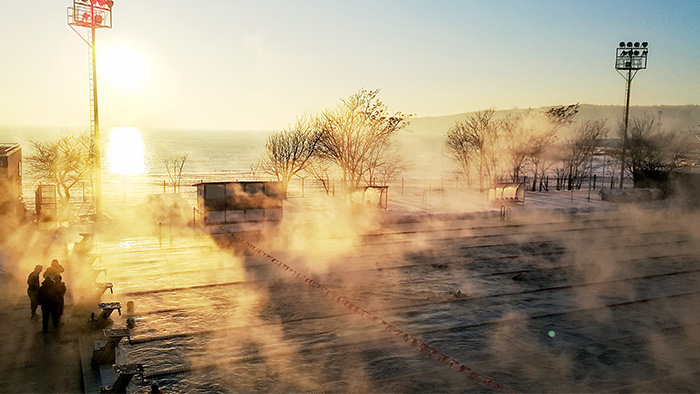 Getting back into a decent training routine can be hit or miss this time of year. I tend to feel sluggish and underperforming to randomly having a great session, then back to a state of mediocrity.

In triathlon, or any sport for that matter, consistency is key. But it’s hard to have consistently good workouts when your fitness isn’t where it would normally be once you’re back in good form.

As I’m bringing my fitness levels back up in the pool, I can’t hold threshold paces very long for 200s or above. When this happens, I simply make some adjustments to my workouts to accommodate for my early season fitness level. These workouts put an emphasis on shorter, higher effort outputs I know I can sustain (however they are not easy by any means!).

My swim workout strategy falls into two approaches: A hard threshold set (20×100 with about 10 seconds rest). During these sets, I ignore the times, and instead focus on a generally hard effort (whatever that looks like on that particular day).

The second type of early season set I do involves keeping the intervals very short alongside a max effort, followed with a long pull set where I make sure to negative split halfway through.

The second type of early season set I do involves keeping the intervals very short alongside a max effort, followed with a long pull set where I make sure to negative split halfway through.

Here is an example of an early season set with some max efforts but short distances:

The aerobic 50s in between fast bouts could be completely easy or what I would call “slightly faster than warm up pace.”

Don’t stop even for a few seconds, just make note of your time on the clock or your watch. Picking the pace up two seconds per 100 could take a lot of effort if the first 500 are swum too quickly.

A key component to my swim training is following up threshold or VO2 Max work (the main set) with an 800 to 2,000 worth of pulling. Sometimes it’s just a strong 800 followed by easy swimming, other occasions it can be 2×800 faster than IRONMAN 70.3 race effort on the first one, the second is the same or faster.

Copyright © All rights reserved | This template is made with by Colorlib